AN EXHIBITION FOR FIORUCCI

It was certainly not easy to rebuild Fiorucci’s history, that so much influenced the new generation’s style, just a few years after his death, and yet so many years after the ordeals that estranged him from his creation, depriving him even of the trademark. “Epoca Fiorucci” exhibition, open at Ca’ Pesaro in Venice until the 6th January, mends in a certain way the past to the present, reaching the phenomenon’s roots starting from the philosophy of the shops, real shop windows of his style. ﻿His world and his passions collided in these spaces: avant-garde fashion from swinging London onwards, post-modern design with the contribution of great innovators such as Sottsass, Mendini, Branzi, De Lucchi, pop and street art with the participation of standing artists such as Keith Haring, Jean-Michel Basquiat, Andy Warhol. Original décor of the shop in Venice show back the atmosphere in his store shops in the world, from Milan to New York to Los Angeles, Tokyo, Sydney, Rio and Hong Kong and create curiosity in the new open store in London. Next to photographs, videos, clothes, accessories, all sorts of gadgets, the Venetian shop’s setting recalls the Fiorucci’s “philosophy”, because - as he always used to say - A shop is “a relation among emotions, thoughts, languages and different souls”. Superstudio contributed in finding different historical pieces and various materials supported by Franco Marabelli, architect who curated the legendary shop in New York very popular by Andy Warhol and Madonna, collaborator of Elio Fiorucci for many years. Gisella Borioli, friend since both youth, has given a testimony on the nice book along with the exhibition curated by Gabriella Belli and Aldo Colonetti. A Fiorucci corner that proposes again a joyful and desecrating style will be present at White in September. 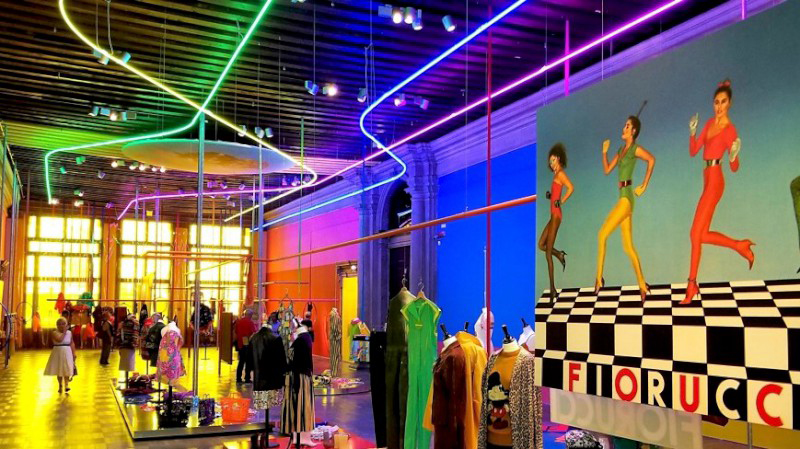 
THE LOUVRE BY JEAN NOUVEL